Huperzine A 200mcg by Source Naturals 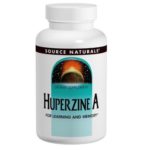 I decided to try Huperzine A after reading this interview with Dr. Diana Driscoll, a researcher (and fellow potsie) about the connection between POTS and MCAD (Mast Cell Activation Disorders). Dr. Driscoll claims that some people with symptoms of POTS and MCAD have low acetylcholine levels (a neurotransmitter). There are two ways to increase acetylcholine levels – one is by taking supplements that are precursors to acetylcholine (such as choline or alpha-GPC), the second technique is to take acetylcholinerase inhibitors that prevent acetylcholine from breaking down in between your neural synapses.

Huperzine A is an acetylcholinerase inhibitor. Another common one is Mestinon – a prescription medicine primarily used for people with Myasthenia Gravis.

For me, Huperzine A was amazing. Taking it for the first time made me feel 10 years younger. All of my orthostatic problems disappeared, and my standing heartrate was the lowest it had been since I started measuring. At first I made the mistake of taking it every day. On the third day, I experienced a lot of intestinal discomfort and nausea (the primary side effects of acetylcholinerase inhibitors). This happened because acetylcholinerase works for a long time, so each 24 hours when I took another pill, the old one hadn’t worn off yet. These days when I take Huperzine A, I wait 2-3 days between doses.

I’ve read that taking acetylcholinerase regularly might make it difficult for your neurons to self-regulate. My personal experience did show that the first time taking Huperzine A was the most potent – no other time after that was the effect so great. There are also a lot of anecdotes going around online about taking Mestinon long term did not continue to work as effectively. However, I talked to my neurologist about this, and he claimed it wasn’t concerning.

Overall, Huperzine-A could be great for significantly reducing symptoms, especially if you suffer from signs of acetylcholine deficiency. Watch out for side effects such as nausea and indigestion (although another common side effect is appetite suppression – so if you have a small appetite while taking it, listen to your gut!) I personally wouldn’t recommend it for everyday use, because it could become less effective over time.

Designed By HowlThemes
Back To Top